CONTINUATION OF THE BLOG

Please click on the link below to go to part 2:

Summary of work to 23 November


This week the gas system and cooker have been connected up and tested.

The saloon skirting board and pipe covers have been installed. These are solid oak.


Photos:
Apparently I have reached my upload limit.
I have been through the blog and deleted some old posts and photos but the upload limit warning is still showing when I try to upload.
I will look into this when time allows.

This week I  spent three days getting 2 more coats of varnish on the graining and decoration in the engine room and back cabin.
I also spent a day painting the saloon and galley cabin sides.
All of this doesn't show on photos so there aren't many this week.
Posted by andywatson at 04:17 No comments: 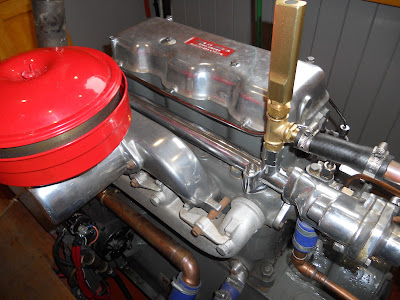 During the trip to shotblasting a couple of water leaks on the engine were noticed.
These were from a weld on the "water rail" which had had a section welded in (weld leaking) and the removable plates (water doors?) at each end of the cylinder block which allow access to the coolant area for clean outs (leaking joints).
This was reported to Walsh's who had overhauled the engine in 2009.
Since the engine has only recently been commissioned Walsh's very creditably honoured their warranty and sent a genuine Gardner trained engineer to effect repairs on site.

A highly polished brand new water rail was fitted (as shown in the photo above) and the water doors were removed and refitted with new gaskets and sealant.
The seal faces were thourougly cleaned first but these joints are well known for leaks. Typically these still have a very slight leak which will be cured in due course.
Posted by andywatson at 03:30 No comments:

Summary of work to 9th November.

Ian Kemp has completed his decoration of the back cabin and engine room.
I have managed to complete the first coat of yacht varnish on all of this. Two more coats will be applied for protection and to enhance the shine.

The Domestic hot water and central heating system has been de-bugged and is operating well.

Other than that I 'av mainly been painting...

Posted by andywatson at 13:20 No comments:

The Kabola boiler for the central heating and domestic hot water has now been commissioned and after a few glitches the system is working well.
Refer to previous posts for details but to recap the main features:

-The kabola boiler is diesel fired and fed by gravity from a header tank under the back cabin bench seat.
-Water is circulated around the heating circuit and calorifier by a Bolin pump.
-By closing a valve in the wardrobe the hot water from the Kabola can be all diverted to the calorifier to heat the domestic hot water only.

1 The Kabola boiler has been in storage for a couple of years and needed the regulator cleaning out and lubricating with fuel to get it working. Fortunately help was at hand.
The ever helpful John Sanderson who has a Kabola himself and is familiar with its workings took a break from boat painting (and eating pies) to carry out this job in minutes.
On lighting the stove it ran well and with the bolin pump operating the central heating circuit soon warmed through.
But:

2  The calorifier did not seem to be getting any heat and when the valve was closed on the central heating circuit the water temperature climbed quickly.
The calorifier is horizontally mounted and the bolin circulation pump is not powerfull (it doesn't need to be) so an airlock was suspected.
The compression connections to the coil were cracked open and some air and water was bled off as the header tank was able to provide enough flow to move the airlock.
When the Kabola was relit the system worked perfectly and ran without stop for 48 hours.

On the lowest operating setting of less than 1 (of 6) the temperature gauge settled at 62 degrees C and the boat became pleasantly warm. Domestic hot water was too hot to put a hand under.

3 A standard Delphi type engine fuel filter in the supply from the tank had a leak which was eventually identified as a faulty washer on a blanking plug and replaced, thanks once again  to John , so quickly the Kabola kept running.

At the port/stern end of the engine room Dave has built this step with storage underneath.
It was made from offcuts of the oak flooring with thick brass hinges.
It will probably be used for tool storage being conveniently close to the engine.
Access to the bilge for removal of water etc is also possible in the bottom behind where the flooring ends.
Liquids running back along the base plate will stop here as the fuel tank crosses the hull directly behind. 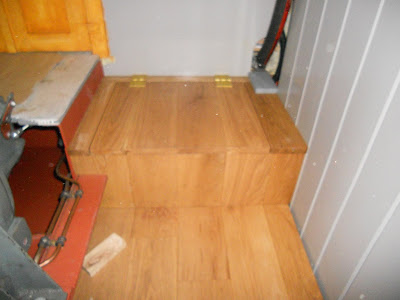 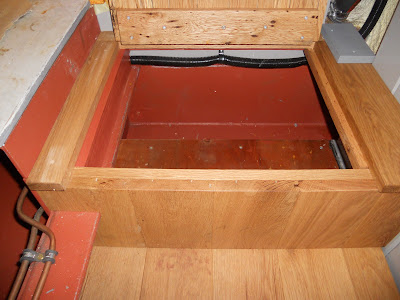 Posted by andywatson at 12:44 No comments: