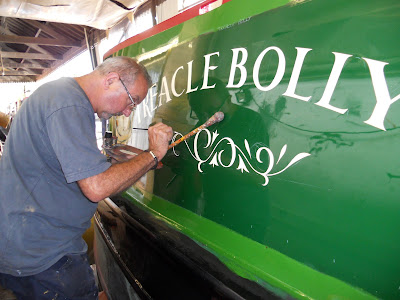 Here's Dave Moore the signwriter, hard it in John's paint dock next door.
Although the photo shows the great concentration and composure needed for traditional signwriting, a few minutes later (and it was nowt to do with me) Dave dropped one of his small pots of paint in the cut and said some very naughty words. 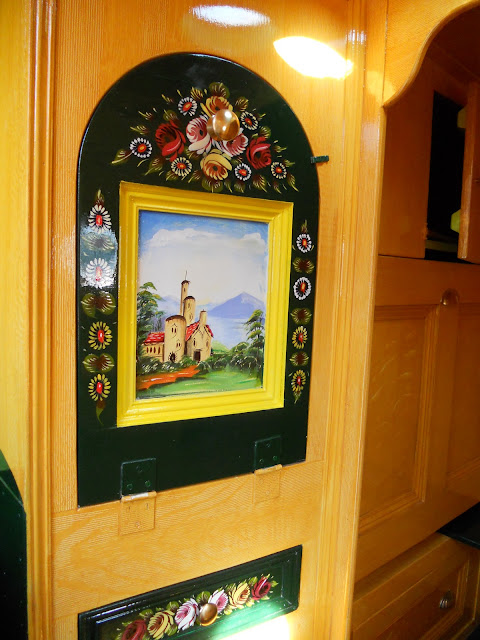 Here is the now finished table cupboard and crumb drawer decoration executed by Ian Kemp on the back cabin he has just completed. 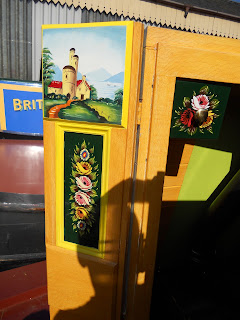 Here are the decorations on the port back door and ticket drawer.
Sorry about my shadow. I could only get a photo from that position on a gangplank.

EDIT to add:
I have subsequently (on 6 October) met the owner of this boat when he made a visit to prepare her for a trip home to Lymm. He is delighted with Ian's work. I would be.

The main reason for my visit today was to help unload 530m of tongue and grooved timber which will be used in the line out. In the tight confines of the sloping yard entrance Dave just managed to get the forklift into position and get the palletised bundle off the lorry. We subsequently carried it by hand into the shed and stacked it to one side. I'll be going down again for a couple of days next week to sand it all down. I can't wait.

Posted by andywatson at 11:45 No comments: 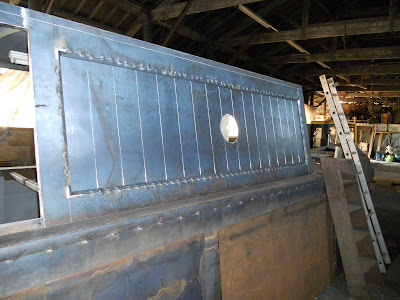 Here we see the inset panel now reinstalled in it's final position.
To avoid buckling due to the heat of welding the panel is tacked in place and will in due course (as my solicitor would say) be carefully continuously welded in short sections.
Due to the way the light reflects off it, the scoring looks quite prominent here against the dull sheet.
However it is only about 0.5 - 0.75 mm deep and after shot blasting and several coats of paint* will be much more subtle.
(* by that fine craftsman, John Sanderson working next door) 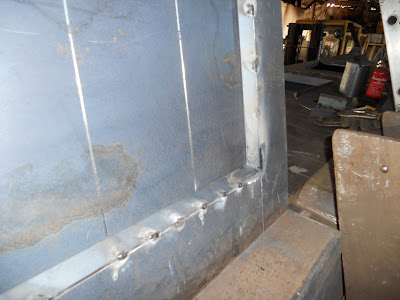 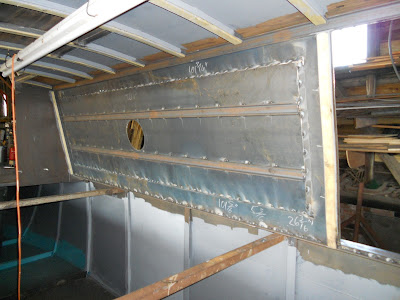 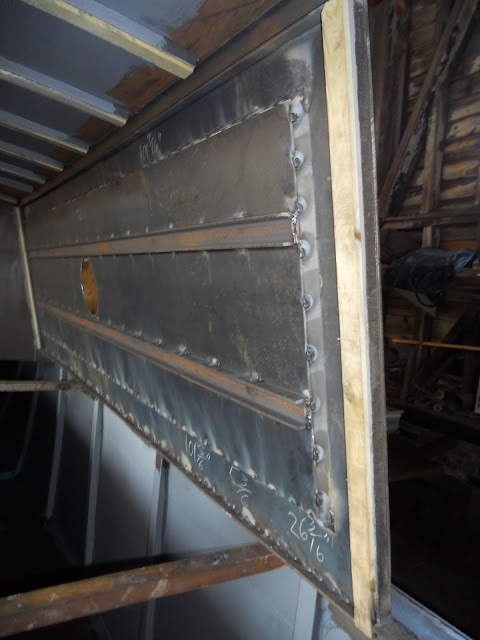 Posted by andywatson at 11:05 No comments:

Whilst this boat is made of steel it is a replica of a wooden construction  where the cabin sides were planked. Although replication of the planks is rare amongst boat builders, after some discussion of the pros and cons, we decided to go the whole hog and do it here. 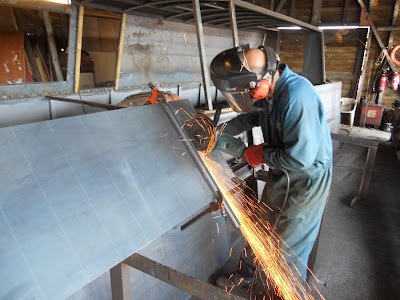 The panel has the plank lines marked in chalk at 6" centres. These are checked to ensure they are central around the ends and also any  portholes where possible and the measurements allow.
The panel is then secured at a comfortable angle and the guide bar clamped in place before the panel is scored along each joint in about 3 passes of a 2mm disc.
The panel can now be installed in it's final postion on the cabin side.
Posted by andywatson at 10:57 No comments:

The centre section of the inset panel, now removed from the boat now has the porthole cut in its pre-calculated position as shown below: 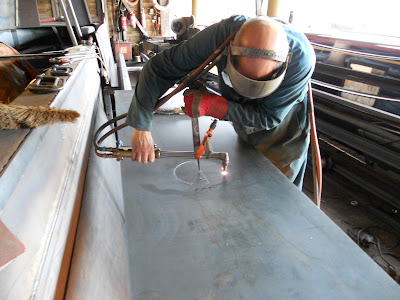 I often wondered how boat builders cut neat holes for portholes in cabin sides.
This is how Dave does it using the oxy burner clamped to an old file with a sharpened tang pivotting around a hole punched at the  centre. Obviously the tang to burner tip distance defines the radius of the cut circle.
He does the hole in about a minute. Is that smart or what?
Posted by andywatson at 10:43 No comments: 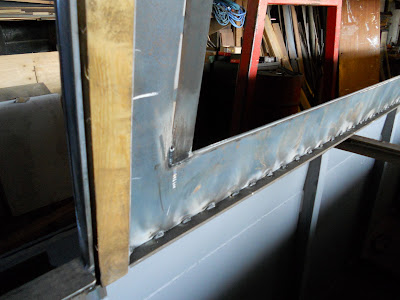 Internal view of the frame edge. 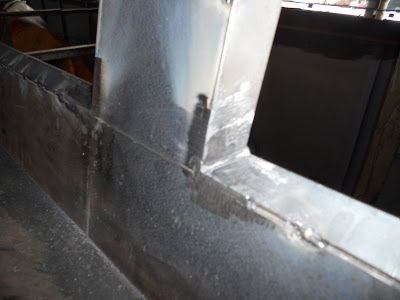 External view of the frame edge.
As described in the post of 22 Sept, the cabin sides are initially put in place as single sheets then the inset middle section is cut out and removed leaving only the "edge planks" in place. The resulting hole is then carefully framed with a strip set at 45 degrees to the plane of the cabin as shown above.
Posted by andywatson at 10:23 No comments:

Email ThisBlogThis!Share to TwitterShare to FacebookShare to Pinterest
Posted by andywatson at 09:34 No comments:

Update and a few other snippets.

As of Friday 23rd Dave had continued work on the starboard side panels, progressing to have 3 of them cut out ready for "insetting" as described earlier.
The replacements for the two port side sheets with edge damage will be delivered next week so no consequential delay to the build has occured.
The steel was delivered some time ago and stored on site so a free replacement by the supplier was not  an option. As I was the beneficiary of the lower price available some time ago I offered to pay for the two replacements. To his great credit, Dave refused my offer, picked up the cost himself and took the two slightly edge damaged sheets into his stock to use where the damaged portion would not be required.(eg a smaller piece in a gas locker).
I wonder how many builders would have taken this line.

On my visit last Wednesday I finally met (after quite some email traffic) Jim Evans, owner of the handsome  replica "Bushells" tug, Gazelle. Jim has many boats (Note: not has had, but has) and years of experience so I jumped at the chance to go aboard whilst we discussed various layout elements. One of the striking features of Gazelle is the absence of portholes which although realistic could possibly result in quite a gloomy interior. However Gazelle has large roof lights and all the doors, which can be opened when the boat is occupied, have sliding clear panels. The result is an interior with very acceptable interior light levels and the bonus of replica build accuracy and improved security.

Although my previoius boat Oslo went to her new owners over a year ago I still get regular reports of her condition and whereabouts. I've even had compliments from people who think she's still mine. Although they live aboard, Steve and Julie keep her absolutely immaculate. Steve has raised engine polishing to an art form consistently finding new items to polish, methods of getting to stuff and better polishes.
When Glennys (Mrs W) last saw the engine she wanted to know what I was doing when I'd said I was polishing the engine.
Posted by andywatson at 06:27 No comments: 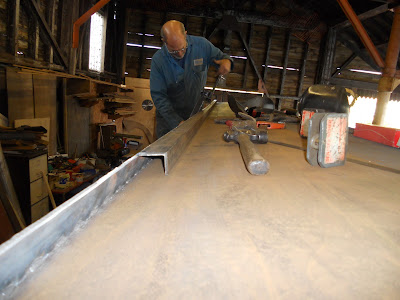 The cabin side sheets protrude above the roof . A length of angle is clamped in place to be eventually welded along it's length to form the third and fourth sides of the box section of the handrail.
The flexibility of the angle section is sufficient to allow the handrail to follow the slight upward and inward curve of the cabin from the engine from roof to the stern.
Posted by andywatson at 13:57 No comments: 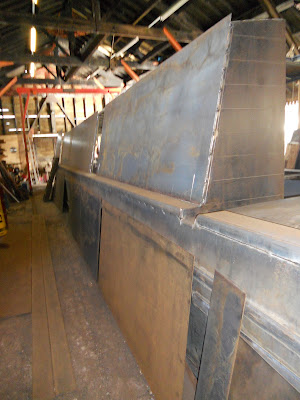 The  starboard cabin side panels have been put in place.
Each cabin side is made of  four sheets which almost but not quite match the internal bulkhead postions as follows:
Sheet 1 (saloon), saloon hatch, sheets 2  (galley, bathroom), sheet 3 (bedroom and front of engine room)engine room hatch, sheet 4 (back of engine room and back cabin).
The panels are welded in place as shown, then after cutting the portholes the inset panels will be made by cutting the relevant centres from each sheet and re-welding them in place set back in the framing. 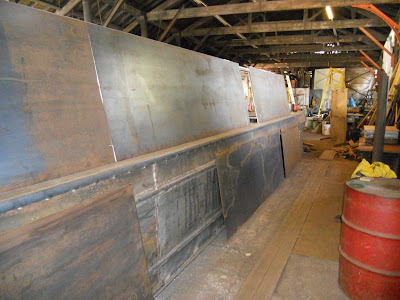 Looking forward, shows the central sheets.
Unfortunately 2 of the 8 sheets were found to have some damage near the edges so they were rejected by Dave. Whilst perfect replacements are supplied there is enough work to be done before the port side is put on. 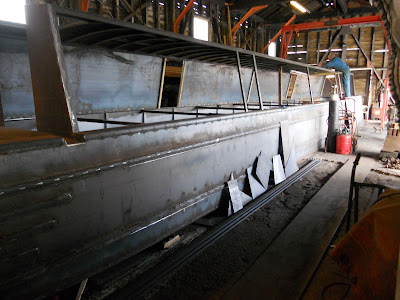 Posted by andywatson at 13:39 No comments:

Dave has been a busy bloke since he got back from holiday.
Here's the sight that greeted me as I walked into the shed yesterday: 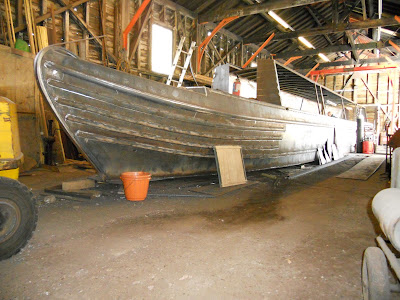 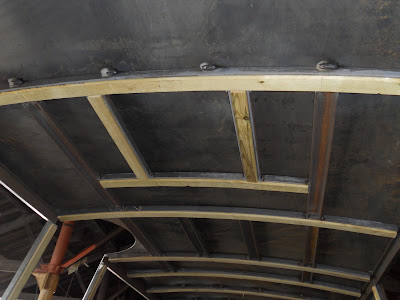 Internal view of the roof over the engine room.
The wooden battens are treated roofing lats.
To follow the curve of the roof without splitting, the lats each have a few transverse slots cut before being screwed in place
These are fixed into the 25 x 50mm channel before the roof sheets were put on. The screw heads therefore don't show as they are under the roof sheet. 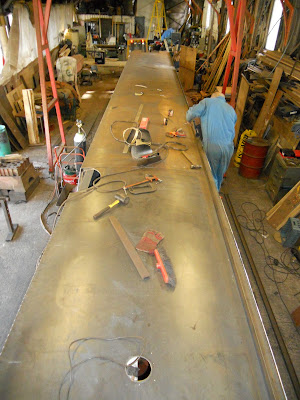 View along the roof .
Posted by andywatson at 12:59 No comments:

While Dave has been on holiday and things were quiet on my build, Keith over at Brinklow was busy on Hasty. He commissioned the steam plant and took Hasty to the Shackerstone Rally, her first outing..
It takes some doing to upstage the BBMF Spitfire and Lancaster  which did a display but it was a close run thing. 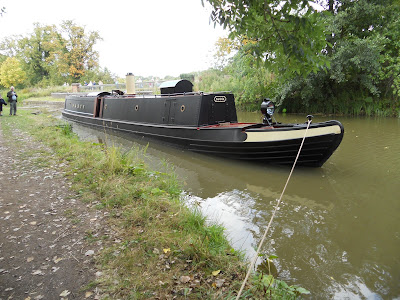 With her deep draught and the shallow water Hasty could not moor very close to the edge.
I predict a few collisions with oncoming boats in shallow chanels.
The eggshell black is authentic and looks quite threatening. She is an imposing boat. 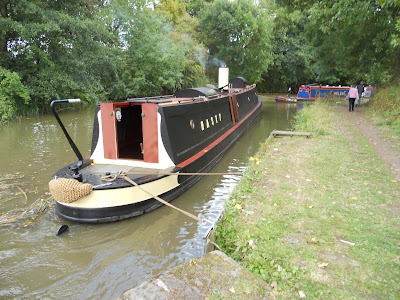 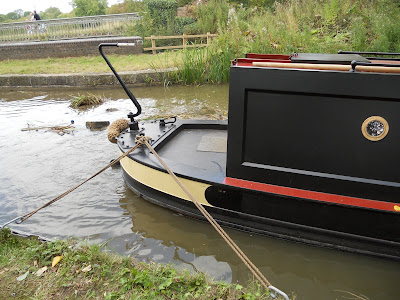 Note the twin towing hooks and load spreading plate.
The stern deck planking is still to be added.

More information on Hasty is at http://www.tunneltug.co.uk/ 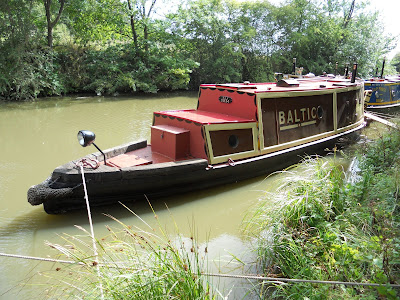 Also at Shackerstone was this lovely old boat. An icebreaker built circa 1840. It was originally unpowered
Note the composite iron and wood construction. 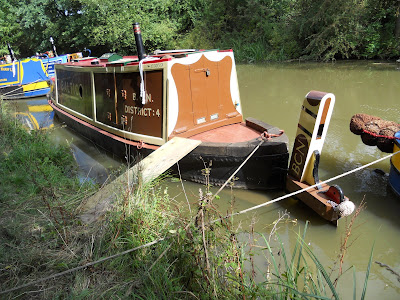 Meanwhile Dave is back from holday and cracking on with my boat. I'll go down next week so expect an update then.
Posted by andywatson at 03:32 1 comment: