Summary of work to 28th Septemeber

With the boat back at the yard Dave has got on well with construction of the bedroom.
I have fitted the lighting and gloss painted the insides of the galley cupboards and the back cabin.

The water rail on the engine was found to be leaking on a porous weld so has been removed and returned to Walsh's for repair.
Posted by andywatson at 09:24 No comments: 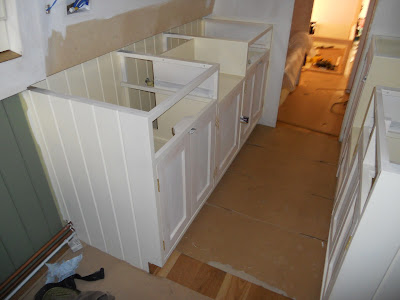 The galley doors have been hung and the interior of the units gloss painted.
To allow better access the worktops have been removed.
Posted by andywatson at 08:34 No comments:

The door between the engine room and bedroom is split as shown.
Since the bed when extended in use will block the bottom of the door, having a split door will allow an emergency second means of egress via the engine room.
It will also allow kids/dogs etc to be kept out of the engine room. 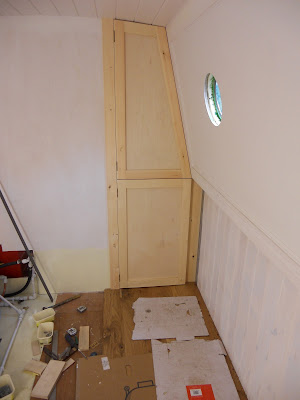 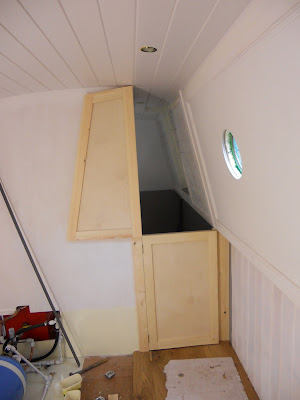 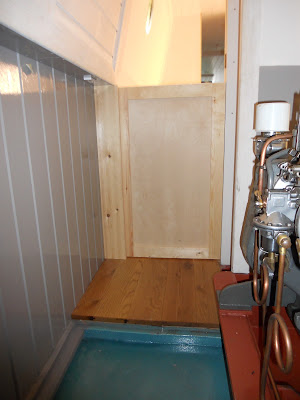 Posted by andywatson at 08:20 No comments: 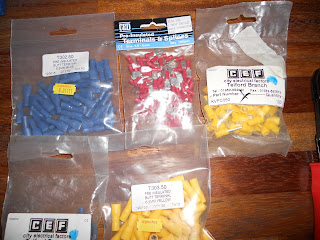 This week the LED lighting was installed.
The wiring loom was put in before the lining was fitted leaving wires to each light hanging from holes pre cut to take each LED light unit.
The ceiling  lighting is 12V with each unit having 10 LEDs giving light output equivalent to a 20W halogen fittings but with much lower current draw.
Above is a collection of CE marked terminals. Just out of shot to the right is the CK terminal crimper which has assymetric jaws which crimp the conductor tighter than the insulation. Before starting this work I had some tutoring from the Loomtech electrician and made some practice crimps.
Wherever possible shrouded pre-insulated crimps were used on the supply side as shown below.
ie Yellow is the female supply - the red spade is to the fitting.
This connection is self protecting against a short.

(An example of an exception to the above is where tight clearance onto a small switch meant that an unshrouded female was used onto the switch spade terminal but in this case the wire cannot move and it was also protected by insulating tape.) 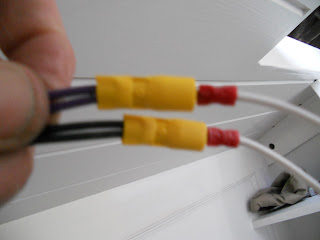 The photo below shows pin terminals used where the supply wire enters a screw terminal.
In a domestic installation the bare wire is OK but here the pin terminals protect against vibration. 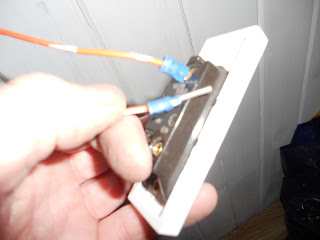 The ceiling light fittings are flush with the lining as shown below.
They are slim enough to fit within the 19mm board thickness which means that insulation did not need to be removed to provide clearance. 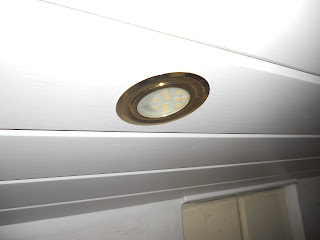 For more subdued lighting in the saloon, bedroom and back cabin, small wall mounted spotlights will be installed.

Back to the yard 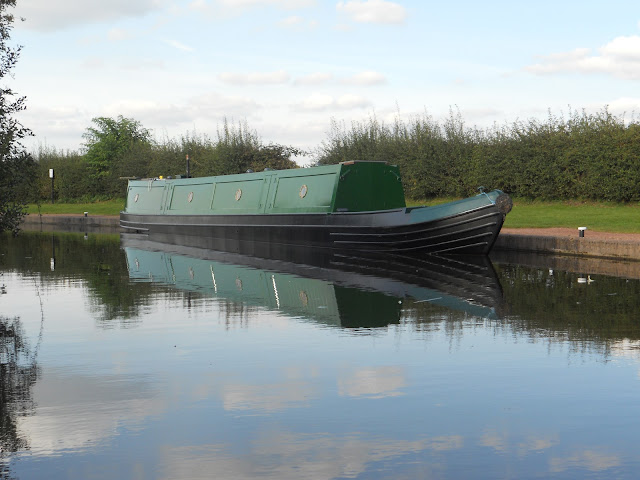 Over this weekend the boat has been moved back from Hatherton to Dadford's Wharf where the fit out will continue tomorrow.
Whilst waiting at the top of Bratch Locks I was able to take this 3/4 view.

The boat handles very well - except for sluggish reversing and stopping which is an effect of the shortage of ballast.
By way of explanation:
The counter (at the back of the hull) is about 3 inches above the water line.
When travelling forwards the counter is pulled down into the water to an acceptable level and the prop operates efficiently.
In reverse this does not happen and the propeller sucks in air from the surface and runs in froth rather than "gripping " the water.
Posted by andywatson at 10:44 No comments:

Back in the water and cleaned


Today Glennys and I spent another day cleaning.
Now the boat is out of the grit floored poly tunnel we could make a serious attempt to complete the cleaning. This involved getting all liftable floor panels up and once again going round with the vacuum cleaner. The entire interior was also washed from the ceiling to the floor.
This took us about six hours but the interior is now completely fresh and clean from ceiling to bilges.
( Complete with the fragrant smell of lemon Flash )
The photos below show the boat with brassware, slides etc reinstalled.
Even though small portholes have been used - and sparingly at that -  supplemented by prism rooflights, the interior benefits from plenty of natural light.
The prisms light below the front deck and bathroom very well even without any portholes.
I will add photos later.

More ballast will be added to put her about another 2-3 inches lower in the water.
As described earlier the overall brunswick green (which I think looks a bit drab) is not the final colour but is just to provide weather protection untill the final paint job in the spring. 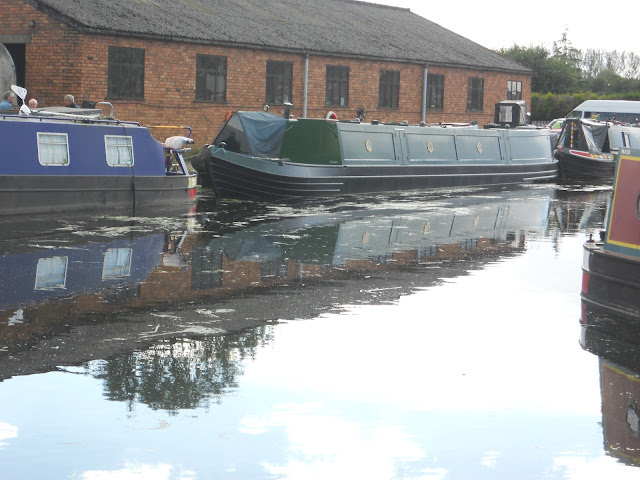 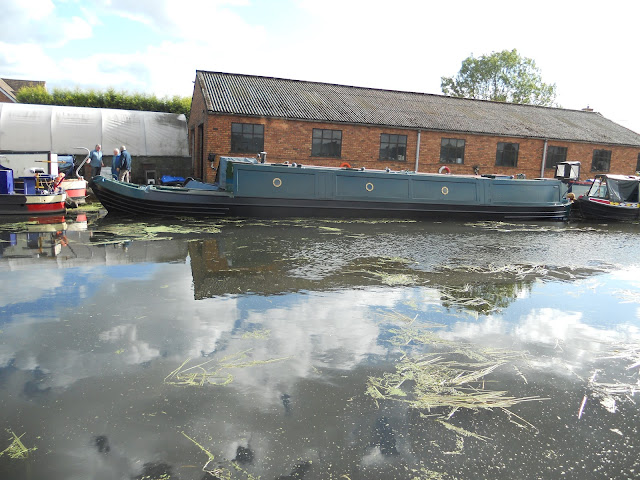 The grit blasting was carried out at Phill Jones' yard at Hatherton.
It was well executed and competitively priced. 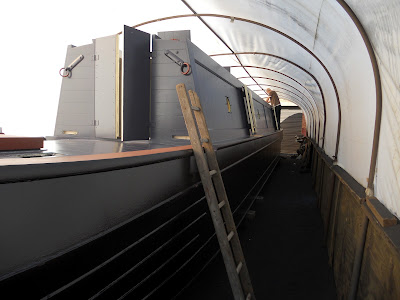 Above is the boat in the first holding coat over the primer. As per yesterday's post it is blue/grey.
Below are photos of today's work, a second coat in mid brunswick green and deep brunswick green - depending which can we had open at the time. This will provide protection over the winter until the proper paint job in spring 2013. 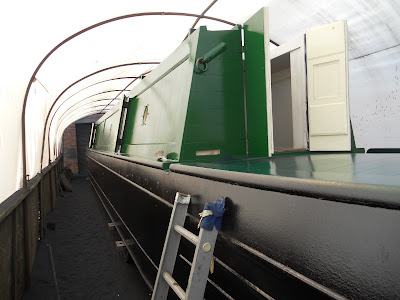 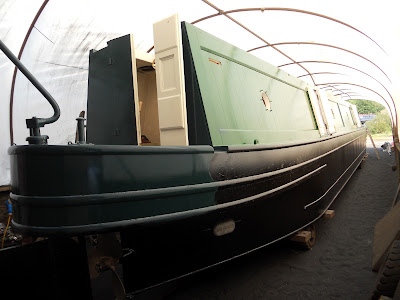 On Monday 17th the portholes, prisms, hatches etc will be fitted and the interior will be washed out and cleaned again. The boat will be returned to the water mid week and over the weekend or early the following week the return trip to Dadford's Wharf to continue the fitout will be made.
Posted by andywatson at 09:24 No comments:

Over the last week the boat has been shotblasted.
It was taken out of the water on a trolley and pushed into a poly tunnel for blasting
Briefly the events were as follows:

I couldn't contribute much to this process so I stayed away until today when Dave, myself and Glennys (Mrs W) went down to clean out the boat, remove the blanks and masking etc, spot prime where the post blast spray had missed and get a coat of gloss over the primer.

Quite a large amount of grit had got into the boat so Glennys spent most of the day mucking out with the vacuum cleaner. A grim job.


The photos below show the boat in the poly tunnel with the spent grit on the floor. (and inside the boat).
The primer used was Rustoleum ,which being based on fish oil has not been affected by the VOC2010 paint regulations.
The blacking used was Dacrylate 2 pack. 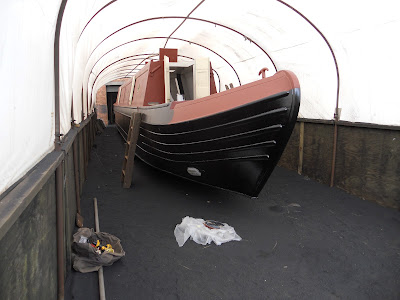 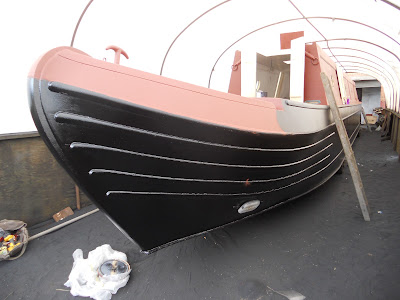 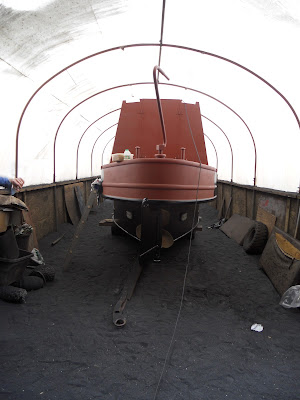 By the end of the day the areas seen in primer had been painted with a gloss holding coat made of  paint from John Sanderson's left overs. It is a sort of bluey violet grey but will be given a second top coat of Brunswick Green tomorrow.

Posted by andywatson at 13:54 No comments:

This week the oak flooring was substantially completed and treated with oil.

The fuelling problem causing the engine to stop and need bleeding after 2 hours running has been traced and rectified. A small hole in the secondary filter housing to the return fuel system was found to be blocked. This allowed bubbles to build up at the highest point in the system until the fuel level dropped below the feed from the filter housing to the injectors. Clearing the hole allows the system to self bleed and engine runs of up mto 6 hours have been made.

Drawers have all been made for the back cabin cupboards and galley.
These have been brough back home and await painting in my garage as time permits.

The engine controls have been reinstalled after being painted brunswick green and completing painting of the back cabin ceiling an undercoat in the engine room areas which are difficult to access with the controls in place.

Final preparations have been made for the maiden voyage when the boat will be taken to shotblasting on Monday.
This has mainly involved all hatches and apertures being or made ready be blanked off  and fitting locking systems to all hatches doors and lids.
The trip will take about two days to complete so I will be "camping" on board.

Incidentally the boat now has a name: Primus.
This was the name carried by the first diesel powered tug on the Birmingham Canal Navigations and according to the register is surprisingly not used on any narrowboat.
Posted by andywatson at 12:43 No comments:

The hearth is inset by about 5mm as the quarry tiles used were 14mm rather than 19mm as these tiles have gone out of prouction. The 5mm downstand to the hearth is not considered a problem and could even be advantageous in retaining any spilt dust or cinders.

Although it hardly shows in this photo, the galley units have received a coat of cream undercoat. 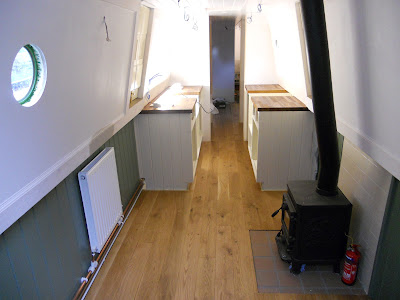 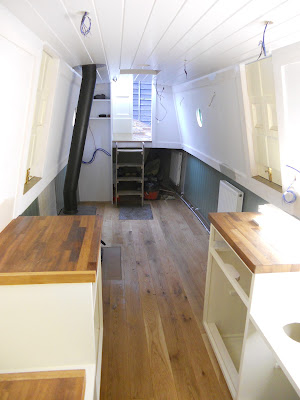 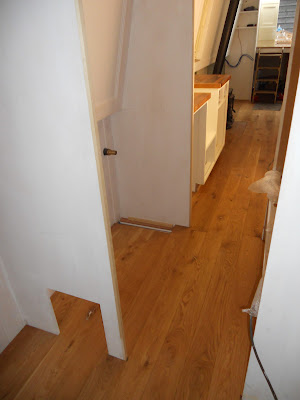 Posted by andywatson at 12:24 No comments: