This blog will be a construction record of a narrowboat to be built by David Harris Boatbuilder and Andy Watson at Dadford's Shed, Stourbridge commencing 31 March 2011.

The boat will be a (loose) replica of a wooden hulled tug as built by Walkers of Rickmansworth for operation on the Birmingham Canals. It will be 62 feet long and powered by a vintage Gardner 3LW diesel engine.

As a pile of steel is not very photogenic (what do you expect at this stage) here's a picture of the engine. 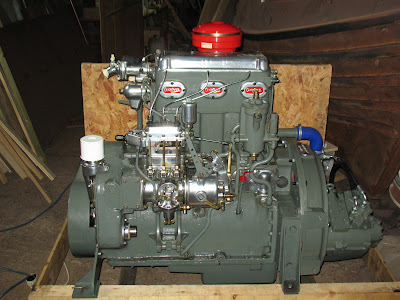 I had a 3LW in my last boat and got on with it very well so finding another at the right time was lucky
The engine was supplied by Walsh's who operate from premises close to the old Gardner works near Manchester. Consequently they have a few ex Gardner employees and a good stock of spares.
They are more involved in the heavy commercial vehicles than canal boats although the former is probably a more demanding market. I enquired amongst a few boat owners with Walsh's engines and they were satisfied with both the engines and after sales service so I committed to this one.
The photo above shows it as delivered to Dadford's in October 2009.
After spraying a can of WD40 over it, plugging orifices and removing the air filter and protruding delicate parts I built a crate over it and Dave put it out of the way.
Below is the link to Walsh's website:
http://www.gardnerdiesel.co.uk/